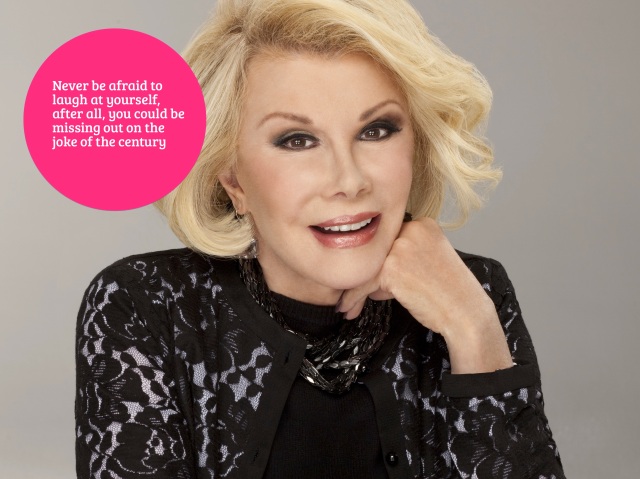 Confession Time.  I watch day-time television.  And (oh boy) it tends to mostly be the E! channel.  I have a girl crush on Giuliana Rancic and I can’t go past Fashion Police.  I come for the fashion, but I stay for Joan Rivers acerbic wit.

1. She was utterly fearless.  You have to be pretty ballsy to say things Joan Rivers said.

2. She shaped her own brand and identity.  She’s often called a trial blazer for comediennes. But she was more than that.  She was constantly challenging the boundaries.  I don’t think it’s easy in this world to be considered as funny and relevant at 81 as you were in your twenties and thirties.

3.  She got knocked down and she came up swinging.  There were plenty of ups and downs and tragedies in her career.  But she never gave up and she just kept doing what she did best.

4. She didn’t care if she offended and she didn’t ask to be liked. She knew her schtick.  And she stuck to it.   She said I’ve learned to have absolutely no regrets about any jokes I’ve ever done … You can tune me out, you can click me off, it’s OK. I am not going to bow to political correctness. But you do have to learn, if you want to be a satirist, you can’t be part of the party

5. She could laugh at herself.  She reserved her best lines for jokes at her own expense.  She might have offended nearly every person in Hollywood, but she could serve it up to herself at exactly the same temperature.  After all, one of her books is called, I Hate Everyone…Starting with Me

Here are some of my favourite one-liners:

“I don’t exercise. If God had wanted me to bend over, he would have put diamonds on the floor.”

“The fun of working on the road means stealing from hotels. I’ve been doing it for so long, I have a set of towels from the Ark.”

“My breasts are so low, now I can have a mammogram and a pedicure at the same time.”

“Never be afraid to laugh at yourself, after all, you could be missing out on the joke of the century.”

See? The best jokes at her own expense.

Sharing makes the world go round

2 thoughts on “Why I love Joan”

This site uses Akismet to reduce spam. Learn how your comment data is processed.

I am Robyna, a mum on a journey to rediscover my minxy self through a celebration of style, creativity and words

I also write for

NEW POSTS TO YOUR INBOX